Birmingham, AL – (December 16, 2020) Thornton Enterprises announces the acquisition of three additional McDonald’s franchises.  In the midst of unprecedented times, a pivot and growth mindset can prove well for positioning for greater impact.  That is exactly what this father-son duo is doing.  On December 16, 2020, Larry D. Thornton, Sr. and his son, Larry D. Thornton, Jr. (Dale) added three local McDonald’s restaurants to their Thornton Enterprises, LLC portfolio.  These additions follow the recent 2019 addition of two stores, giving them total ownership of seven McDonald’s restaurants in and around Birmingham, AL. Larry made history in July of 1992 when he opened his first McDonald’s restaurant Dale, who was 10 years old at the time as appropriately appointed “Playground Manager.” Over the years, Dale rose through the ranks and has learned to manage all positions of the McDonald’s day to day operations, and subsequently became one of the youngest 100% approved McDonald’s Owner/Operators at only twenty-five years of age, in May of 2006 when he purchased his first McDonald’s restaurant. 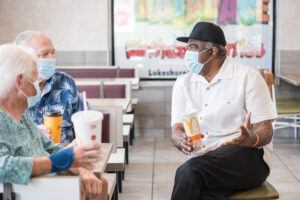 The McDonald’s business model values consistency in service, product quality and customer experience.  That is what one gets in the Thornton Enterprises owned facilities, however, the new additions carry a particular and unique resonance for both Larry and Dale.

“My first experience of stepping behind the front counter of a McDonald’s was at Roebuck McDonald’s (218 Gadsden Highway) where I started my training to become a McDonald’s franchisee,” said Larry.  At the time he was the Advertising Manager at Coca-Cola Bottling United.  He was asked to maintain confidentiality of his eighteen-month, McDonald’s Registered Applicant Training Program. However, on his very first day of training, in walks three of his Coca-Cola department head colleagues. “There I was wearing a headset pushing Cokes, fries and Big Macs through the drive-thru window,” said Larry. “I honestly cannot recall what meandering and cockamamie story I came up with…but as I can recall, it worked.”

Another personal story surrounds the Midfield McDonald’s (11 Philips Drive).  “For four years, I regularly frequented this store as it was the closest McDonald’s to my Alma Mater – Miles College,” said Dale. “My father often reminds me of the ministerial aspects of how we do business.  I am really looking forward to partnering with Miles College and the surrounding community for any appropriate opportunities for giving back,” said Dale. 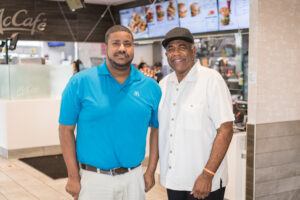 With Thornton Enterprises, LLC. having grown by five McDonald’s restaurants in less than two years, Dale said “we have significantly adjusted our operations approach.” He is extremely proud of their long-term associate and Director of Operations of twenty-one years, Tracey Twyman. “Tracey and his team are more than prepared to meet and exceed these additional challenges.”

Dale went on to say “our plans are to move swiftly on getting these restaurants modernized as quickly as possible…once they’ve undergone a Major Reinvestment Project (MRP), we are quite confident about the growth and sales potential of each restaurant.”

Thornton Enterprises, LLC was founded in 1992 by Larry D. Thornton. Larry was a long-time employee at Coca-Cola Bottling Company United and currently serves as a member of their Board of Directors as well as the Board of Directors of Synovus Bank.  Larry has held numerous positions of community leadership to include being the first African-American President of The Club and currently the president of the world’s largest membership – Kiwanis Club of Birmingham. In 2019, Larry was named CEO of the Year by Birmingham Business Journal.